Oh look! It's getting close to release! I'm so excited the templates are ready to go.  The paperwork is done and I'm ready for class at Modern Domestic PDX 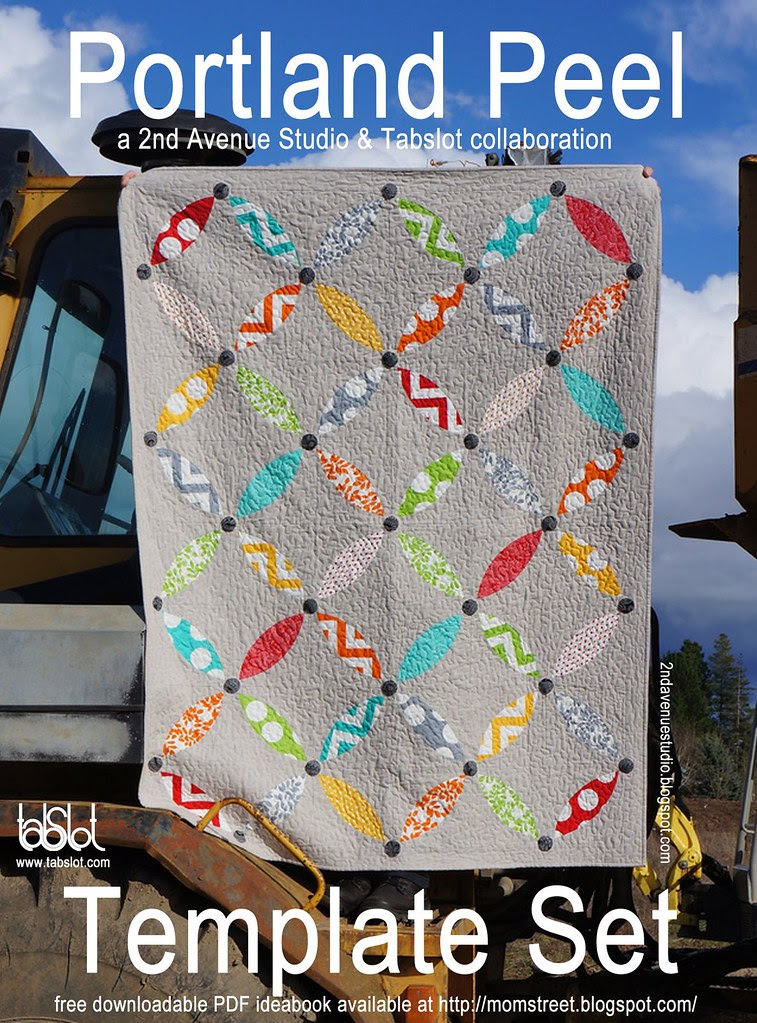 Here is my Quilt as the cover of the template set. I had so much fun working with Jill. The download is on my side bar as is her website. I'm proud and thrilled of all our hard work.
quilters rock!
Posted by 2ndAvenueStudio-Rachel at 4/29/2012 04:21:00 PM 1 comment: 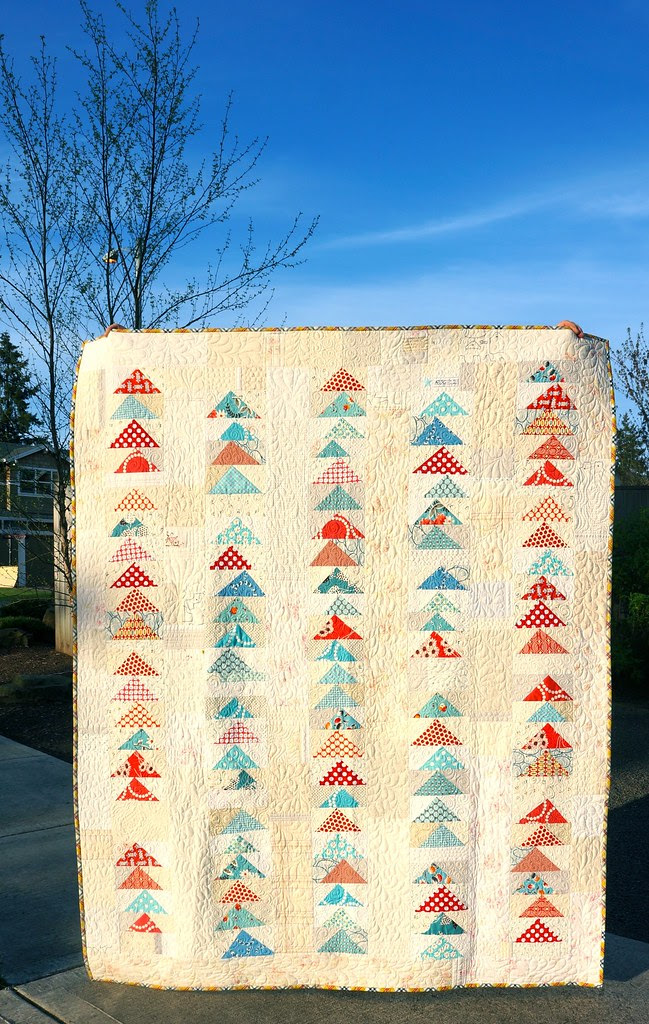 get it? ha! Its a Column of Geese quilt. Popular with the Amish and the Civil War repro crowd, I've never been particularly inspired by them. I'm pretty pleased with my interpretation.
But I fell in love with my little process for making Geese and I was off to the races. I started making this with input from friends on flickr, I got kinda carried away. I mean, who doesn't like talking about their making? I spent a week or so,  putting up photos and saying "hey, look at what I just did?" 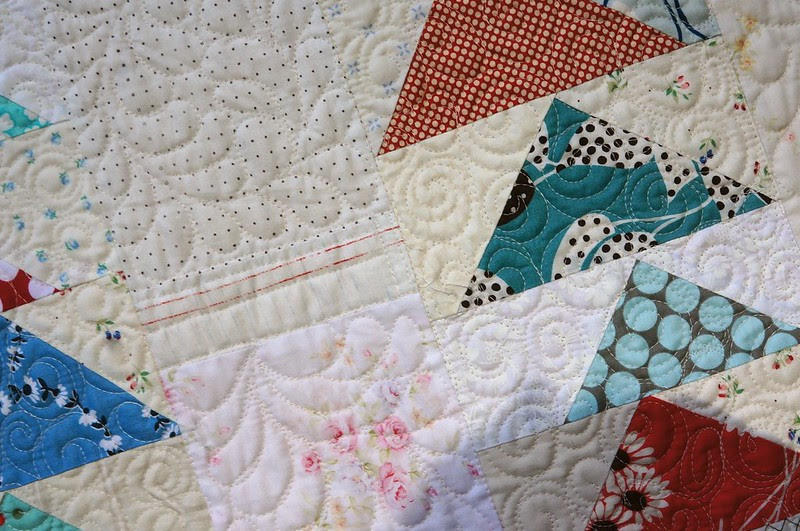 The strippy style quilt is also something I've done but hated as I thought it was boring..  by piecing the strips I got to show my "girly" side with the Quilt Gate by Robert Kaufman prints 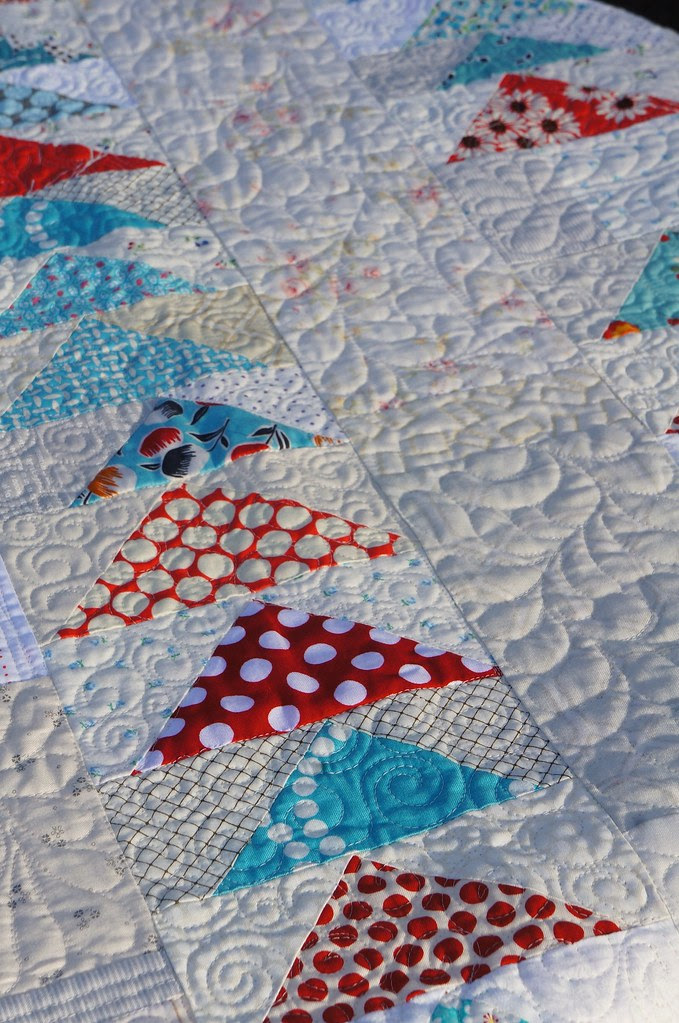 and my "modern" side with the grey, linen and selvages. 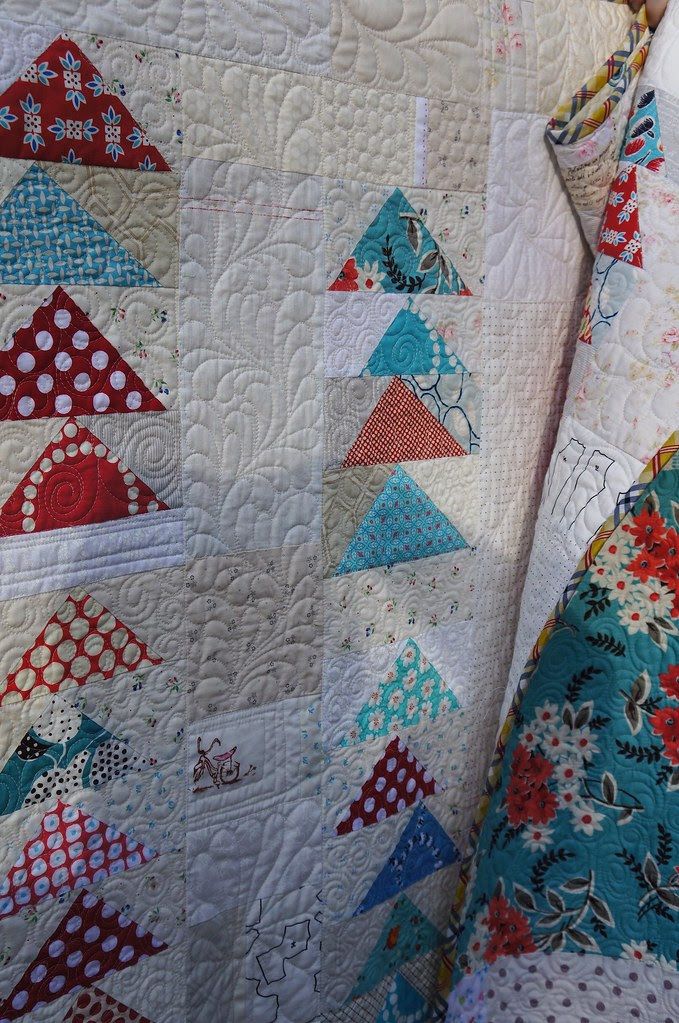 There are so many details that it's really impossible to show every little one. Its a vanity, I know. I put them in for me and I quilt little details in for me. 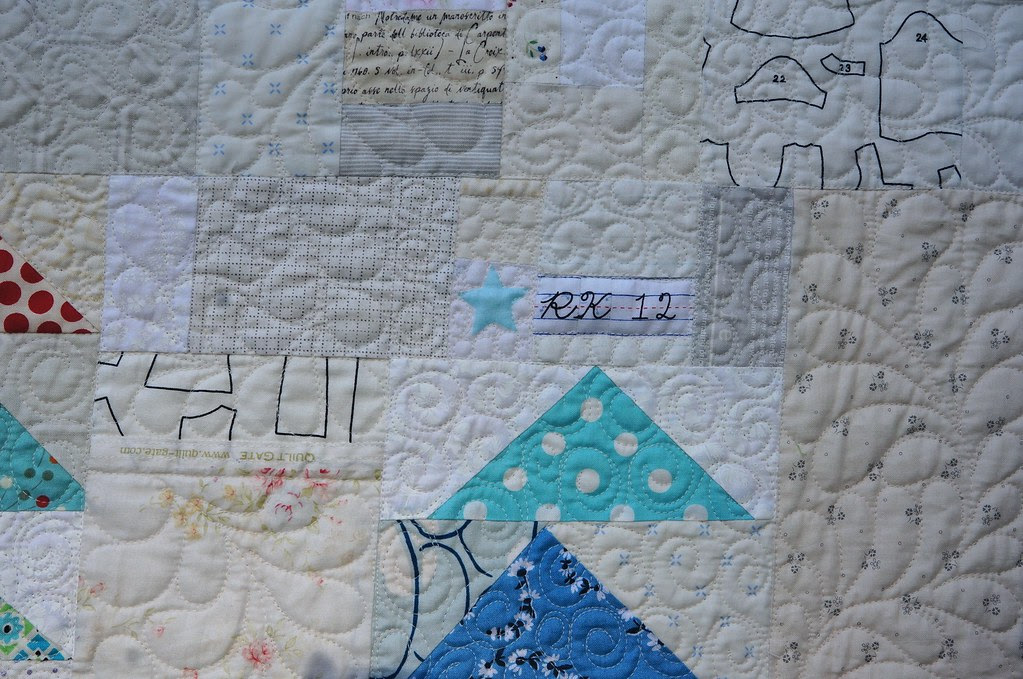 These are my initials...:) and the year.. and I gave myself a star. Good Job! :)
If you don't get to see it in person, most of this is really lost. I just think that when a person gets to have this quilt as their own, there should be "details of love" for them to discover. 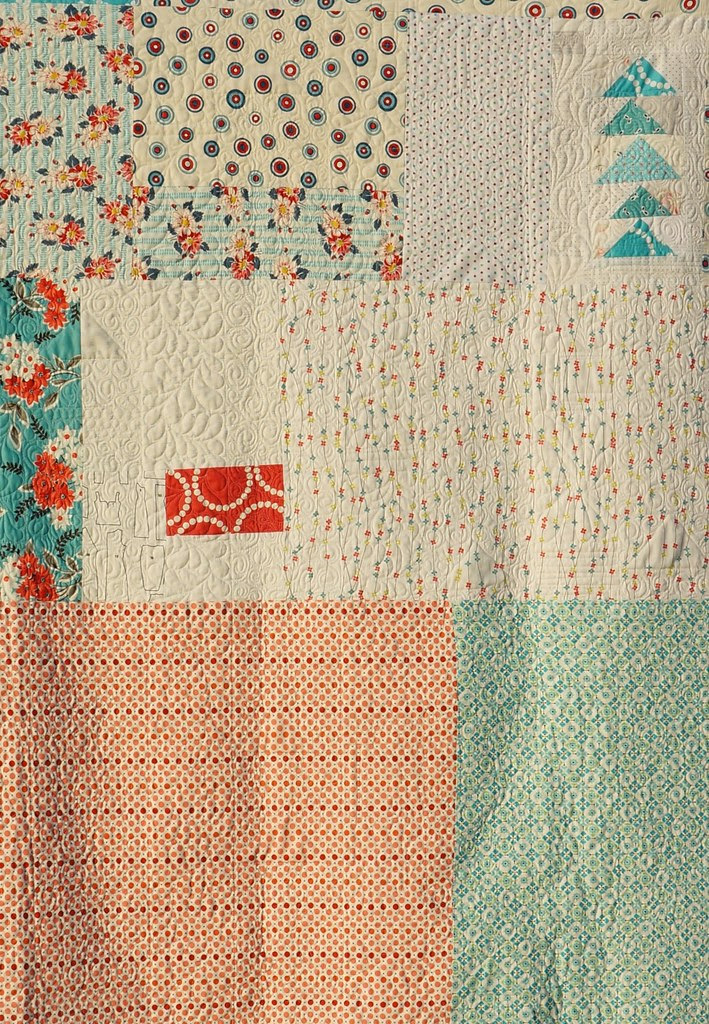 I even pieced the back, something I rarely do, but I think it worked great. Last year Cherri and I did a 7" strip swap of Red/Aqua fabrics. I used quite a few of that stash to make this quilt.
The Red Pearl Bracelet is from Cool Cottons here in Portland, Marie is pretty awesome.  She picks great stuff for her store.

I joined the Precious QAL over at flickr. A QAL to encourage us to use our horded favorite fabrics.
I broke out my Munki, cake rock beach and Flea Market Fancy, etc... 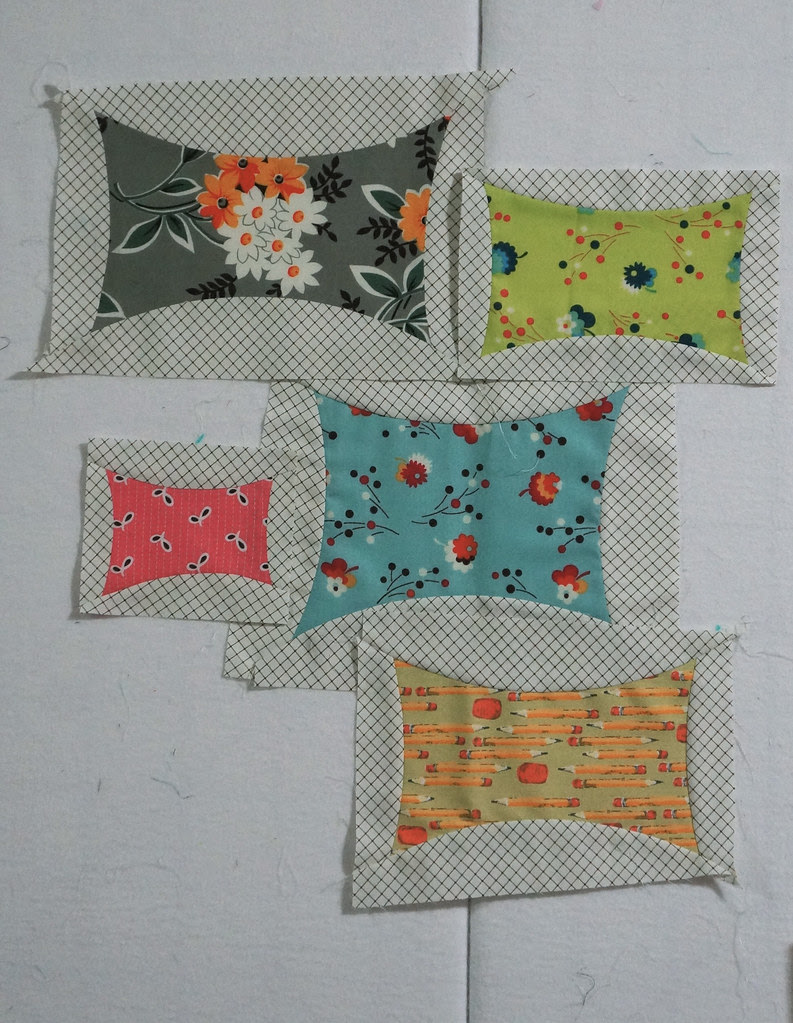 to make these Cinemascope Blocks- or at least, that's what I'm calling them... something like (in my memory) used to be on movie posters. "filmed in Cinemascope" I have no idea where I'm gong with it, but my last project worked so well..... I'm starting a new one.
Quilters Rock! 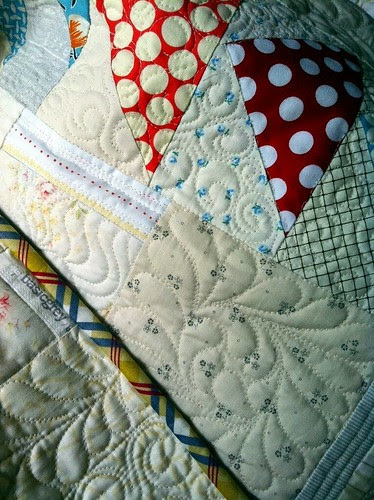 WIP Wednesday April 11, 2012, a photo by 2ndAveStudio on Flickr.
Im applying the binding and the label by hand so before next week it should be all finished. 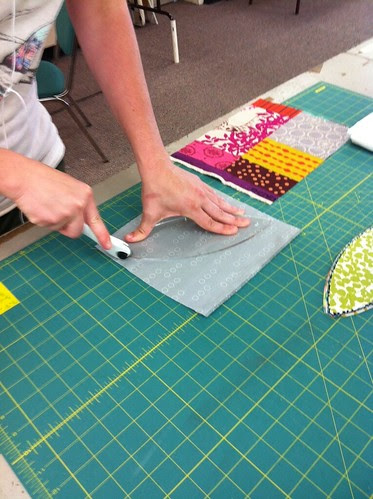 PMQG sew day, a photo by 2ndAveStudio on Flickr.


I just came home from the Portland Modern Quilt Guild's  bi- monthly(?) sew day.  OMG!
A. I had so much fun
B. I got sew little done.
C. I didn't even shop- its at Fabric Depot  which is the size of a Ralph's if your from California or a Walmart if your from everywhere else.  Bummed I missed out.

So... Michelle asked me to look at her featherweight and try and fix it since it was not right.  I sat down and was supportive, we diagnosed it, and I left her to repair it.
now Im gonna brag!
On the way back to my seat, I see a set of templates... MY templates... well, not my templates but the templates I asked Jill at tabslot to make and we ended up collaborating thru several editions to get right.
I had tried several times over the last 2 years to  make this block by recutting twice cutting  drunkards path.  Never worked. 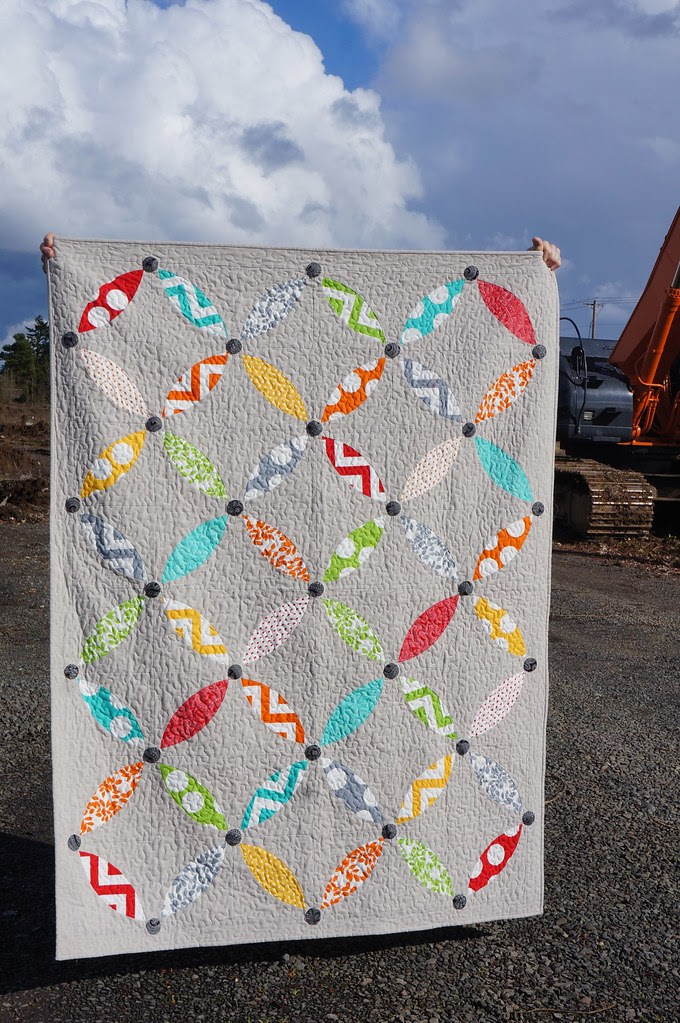 Turns out a member of our PMQG family found inspiration in them and designed a project of her own that would use them.  I couldn't be more thrilled and flattered that someone who told me she hadn't done curves before thought it looked doable. My intention is that the pattern is doable for an advanced beginner, and can be done with no pins... because pinning (for me)  is the big time sink and I have long since abandoned the never ending cycle of pinning curves. boo hiss
Somebody I don't really know likes and is using the template! squeee!
ok, bragging over!

I'd like to see the templates go thru another edition,  and I have yet to finish a basic pattern before they really go public.... But the name, I've decided I like The Portland Peel. Cross your fingers and hope Jill agrees.
Seeing my friends and talking quilting all day is always fun. At one point I had tears running down my face I was laughing so hard.  so. much. fun. ok, now bragging really over.
Quilters Rock!
Rachel 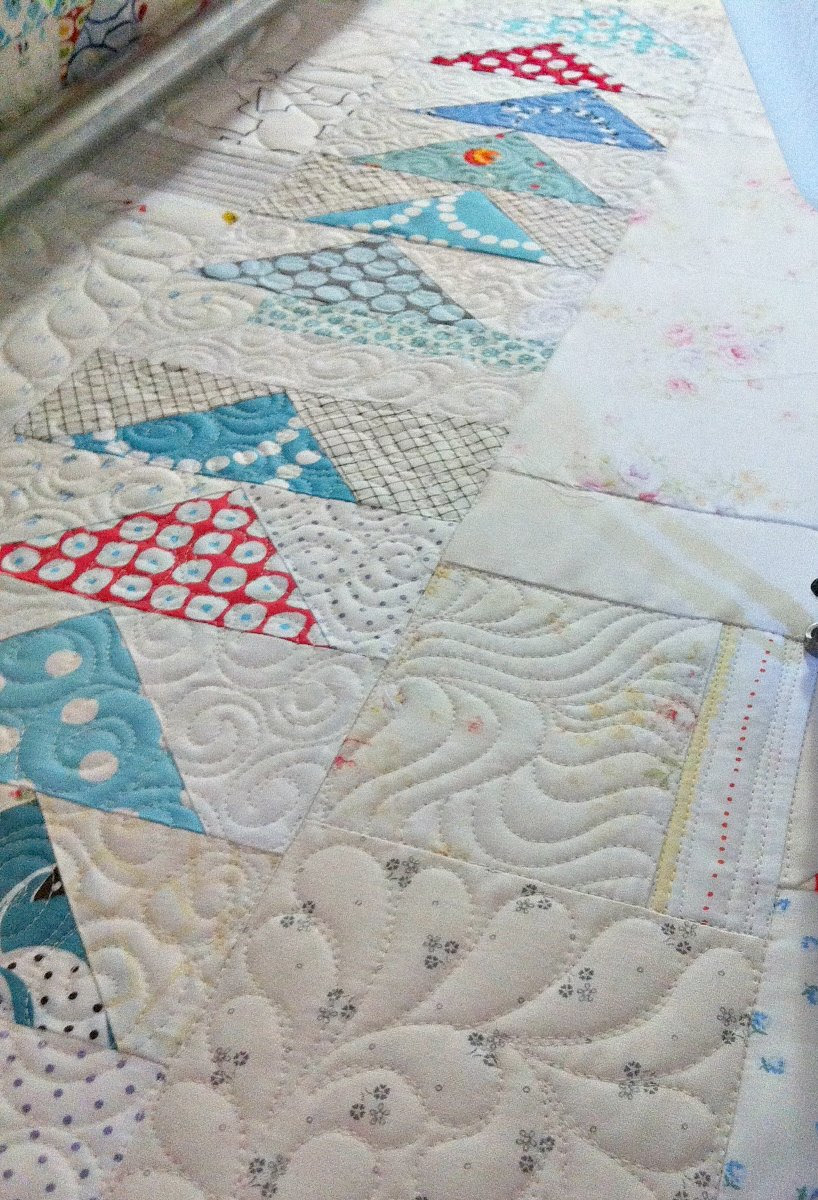 Its on the HQuilter! and I think its looking great and when finished it will be cuddley and cozy. Sometimes, if the quilt gets over quilted it can get stiff and unfriendly. I am using Bamboo Batting (very high cozy factor) and being careful to keep the quilting in the Cozy range. The triangles are wonky yet still well crafted. I made a flickr tutorial about how I made them over here. Its so easy that I thought a full blown tutorial was overkill. I like how my method keeps the top point nice and sharp. My OOP and VHF fabrics that I used in some of the geese had very little waste. Bonus!
I will using this method again. I loved it...
I started quilting yesterday and have only put in a couple hours, I'm more than halfway  at this point....
So,... that's what I'm doing on this Works in Progress Wednesday.  Talk to you later and have a peek at the other WIP Wednesday posts over at Freshly Pieced.
Quilters Rock.
Posted by 2ndAvenueStudio-Rachel at 4/04/2012 12:45:00 PM 2 comments: